5 thermostat failure symptoms and how to avoid them

Do you want to learn how to detect thermostat failure symptoms? Keep reading!

The thermostat acts as the temperature control device in any engine cooling system. Thermostats are in charge of constantly monitoring coolant temperature. When required, they regulate the exact flow of coolant that must pass through the radiator for a constant and optimal engine operating temperature.

Why is it important to check the thermostat for failure symptoms?

Preventing our vehicle’s thermostat from failing requires taking into account some considerations. One of these will be to ensure that the coolant is replaced regularly and carefully so that air does not enter the system as this would lead to overheating and/or faulty sensors.

Another factor to consider in preventive maintenance is visual inspection. Dolz recommends inspecting the thermostat at the same time as the water pump and timing belt. Replacing them in one single operation will ensure that the valves are mounted in the correct position and that necessary fixings are avoided. 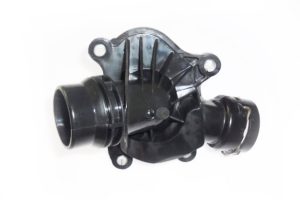 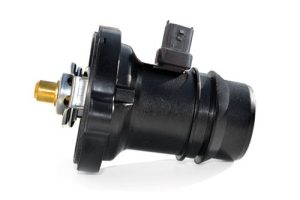 Thermostat failure symptoms that you should know

The main symptoms of a failing thermostat are related to engine overheating. It can be easily noticed because the temperature gauge in the vehicle will probably read unusually high. This can be caused by the valves being stuck in a closed position. As a result, the coolant will not be able to flow and overheating will damage the engine.

Thermostat failure will commonly cause the whole cooling system functions erratically and fluctuates. Keeping an eye on the dashboard’s temperature gauge will allow you to realize if the needle spikes and drops. If this happens, it is probably due to temperature confusion caused by the failing thermostat. One of the symptoms of a bad thermostat related with the temperature is overcooling. It’s the opposite of overheating: the engine never reaches operating temperature. This happens when a thermostat gets stuck open and it causes its fair share of issues as well.

The coolant helps to keep the engine functioning at the right temperature, and the lack or imbalance of the fluid can affect its performance. If the vehicle’s coolant leaks out of the thermostat’s housing or under the vehicle, there is a big chance that the air is getting into the system or that the coolant is escaping it. But keep in mind coolant can leak from different parts, don’t automatically assume it’s coming from the thermostat housing.

Both engine overheating and engine overcooling can largely increase exhaust emissions and damage fuel economy. This happens because the vehicle is not able to reach its operating temperature. In this case, thermostat failure symptoms will most probably be translated into an increased fuel consumption and a resulting unexpected spike in monthly utility bills.

Have you found any thermostat failure symptom?

As an experienced manufacturer and distributor in the aftermarket sector, Dolz has a complete range of thermostats designed according to the specifications of the original manufacturers and using the latest technology.

All our thermostats are integrated thermostats that adjust the flow of coolant towards the radiator, deciding when and how heat is added and are OE equivalent:

If you detect any of these thermostat failure symptoms and need to change your thermostat, don’t hesitate and ask for a Dolz spare part!

About the Author: Patricia Gimeno